4 easy steps to love ANY home without adding more STUFF 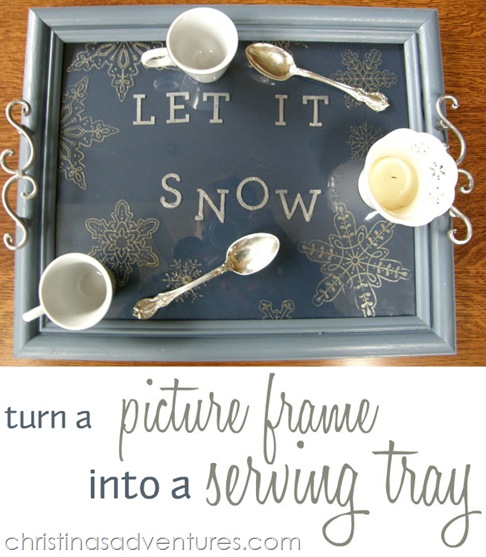 Just the other week, we had a little storm in my area. It was named “Hurricane Sandy”. Not sure if you’ve heard of it

Well stinkin’ Sandy knocked out my power for 4 long days, and I haven’t ever been so thankful for running water, hot showers, flushed toilets, and the internet!  I know that many people were hit much harder than we were, and I don’t want to trivialize that.  I am so thankful we’re back to “normal” around here, and I am praying that people affected by Sandy are able to feel this same way quickly!

OK – the point behind this IS – I received these completely amazing Martha Stewart Paints on the DAY that Sandy hit.  So I spent four days without power, but I spent them with some awesome crafting supplies.

I had to get a little creative though.  We were stuck in our house without electricity.  I really could only use these products on something that I already had in my home.  I rummaged through our storage (flashlight in hand) and came out with this old picture frame: 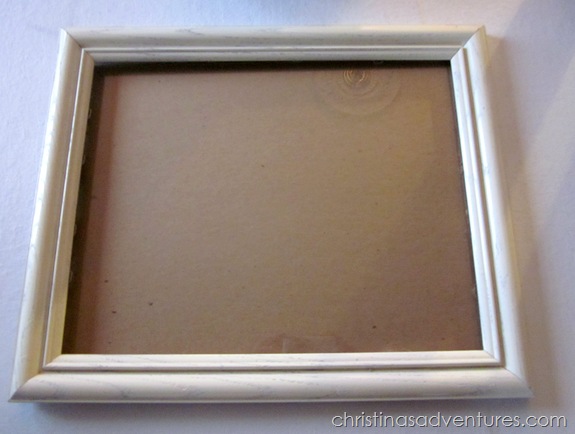 I believe I originally got it from a thrift store, and I had already painted it white.

I dug a little further, and I found some hardware I had bought from Hobby Lobby for another project, but never ended up using.  I had one of those “lightbulb moments” and I decided to make a picture tray frame!  I called my husband in to help and asked him to use his cordless drill to help me screw in the hardware to the sides of the picture frame: 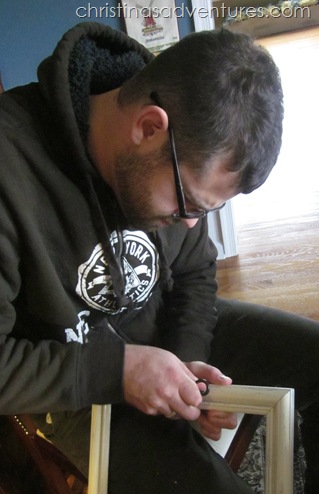 In hindsight, I should have painted the frame first. 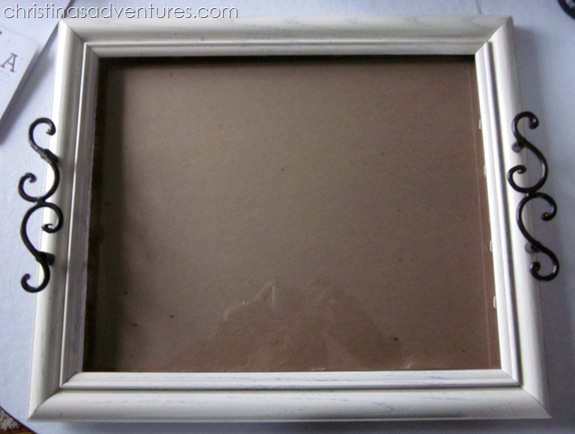 But it wasn’t a big deal, I just had to be extra careful when I painted around the hardware later.  I used a paint sample (less than $3 – AKA my favorite way to buy paint) to paint the frame with one of the brushes from Martha Stewarts “Basic Brush Set”: 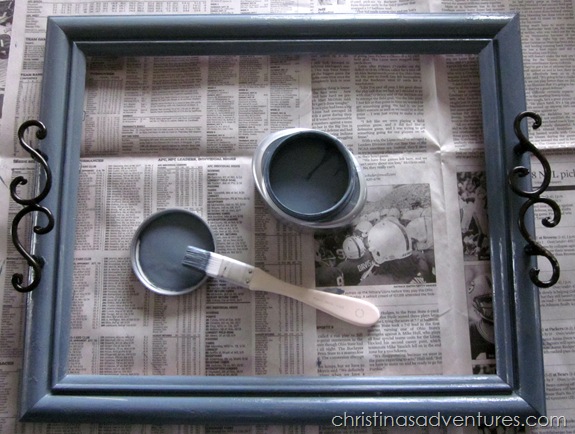 Then I pulled out this amazing little bottle of silver liquid gilding.  It was a little experiment to see how it would look on the handles.  I started using it and I was in love!  Seriously – my mom was laughing at me because she kept hearing me squeal over how much I loved this little bottle of liquid “gold” (which is really silver – but they have gold gilding too 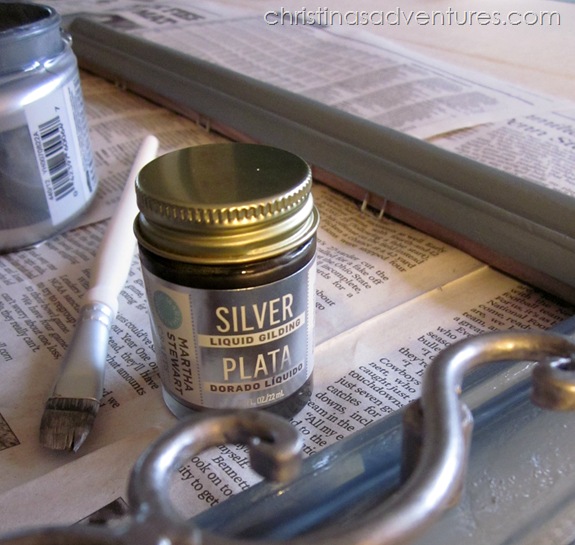 It just went on so smoothly, it only needed one coat, and it is just beautiful! 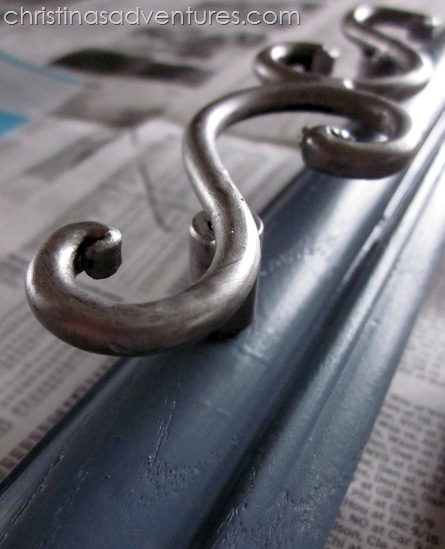 Now I moved on to the glass.  I used Martha’s adhesive letter stencils and her glass paint to write out “let it snow” directly onto the glass.  I love how these easily stick on multiple surfaces, and they’re re-usable too!  I used the stencil brush set to put the paint on the glass: 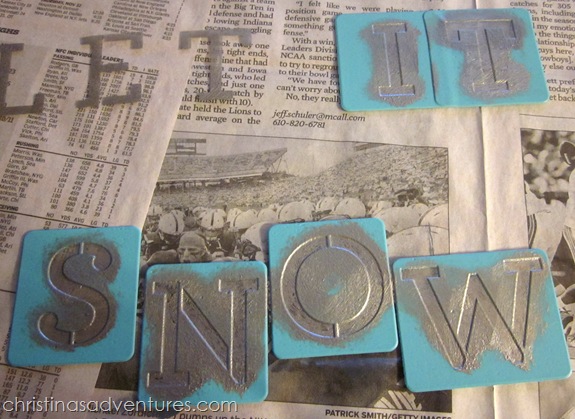 I thought it would be a fun little touch to add some glitter finish to the letters in the word snow, on top of the glass paint.  Bad idea.  Since the glass paint wasn’t dried, it actually ended up weirdly taking the paint off.  Not sure how that happened.  BUT it wasn’t a big deal, because I just touched it up freehand with a really tiny brush.  Problem solved.

It looked a little boring with just the lettering, so I added these adorable snowflake silkscreens.  These aren’t quite stencils, but they act like stencils.  They’re a lot more fool-proof than stencils, which is why I LOVED them.  I peeled the backing off and placed them around the lettering: 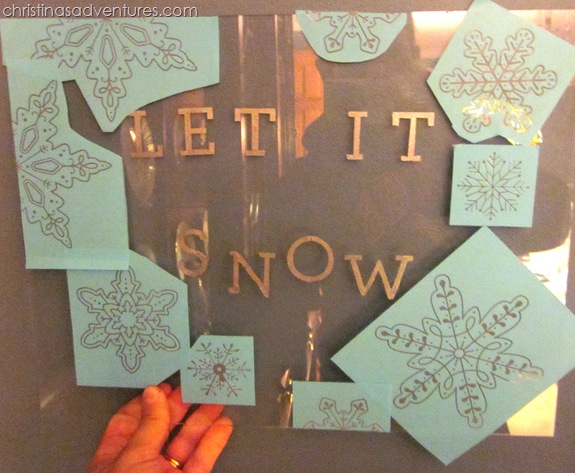 I painted on them with fine gold glitter glass paint – and just loved how it turned out!!  I backed it with some dark blue scrapbooking paper, and set it up in the family room (AKA the room that has the most windows for natural light during a power outage!): 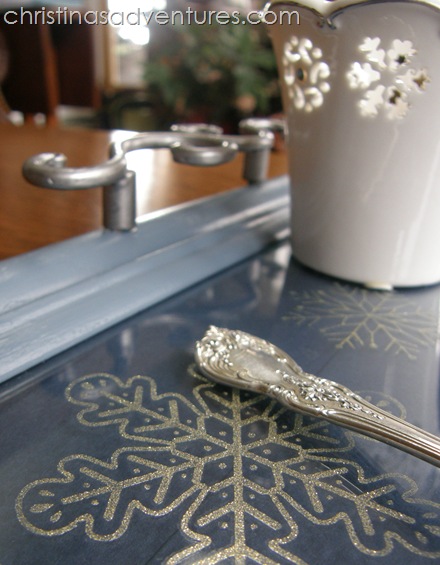 I’m excited to use it for the holidays!  I love how festive it is!  And it looks pretty good for something that was born out of a hurricane too 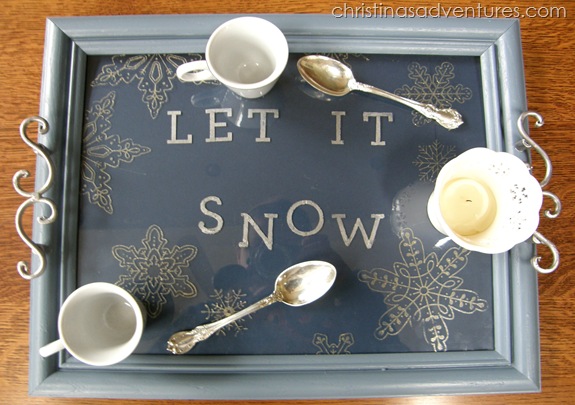 Would you ever try to make a tray out of a picture frame?  Which of the Martha Stewart Paint products that I used would you most like to try?

I wrote this post as part of a paid campaign with Martha Stewart Paints and The Blueprint Social. The opinions in this post are my own.

Tackled the sunroom MESS today - and came out with

Accurate picture of homeschooling at this moment i

After a day filled with things to worry about or l

Curb appeal *update* - this is the fun part, guys!