Sign up for your FREE ebook and bonus insider resources every week!

An honest review of the Tineco A10 Hero cordless stick vacuum that I bought with my own money from Amazon.  Pros, cons, and video footage of how it works! Affiliate links included – full disclosure here.

OK let’s start from the beginning.  I had a vacuum that I really liked, and I’ve had for almost 6 years now. BUT, it was heavy.  It was hard to bring upstairs…which meant the upstairs stayed pretty dirty until I would ask my husband to lug it up the stairs.  Not the best rhythm for housework!

I kept hearing people talking about the Dyson stick vacuum…but, the price tag was just TOO MUCH.  I felt guilty buying another vacuum that was so expensive when I had one that worked already!  It felt excessive and frivolous…until I was browsing on Amazon and found this one.  It was on sale, and much less than the Dyson people had been raving about.  The reviews were great…and I decided to take a risk. 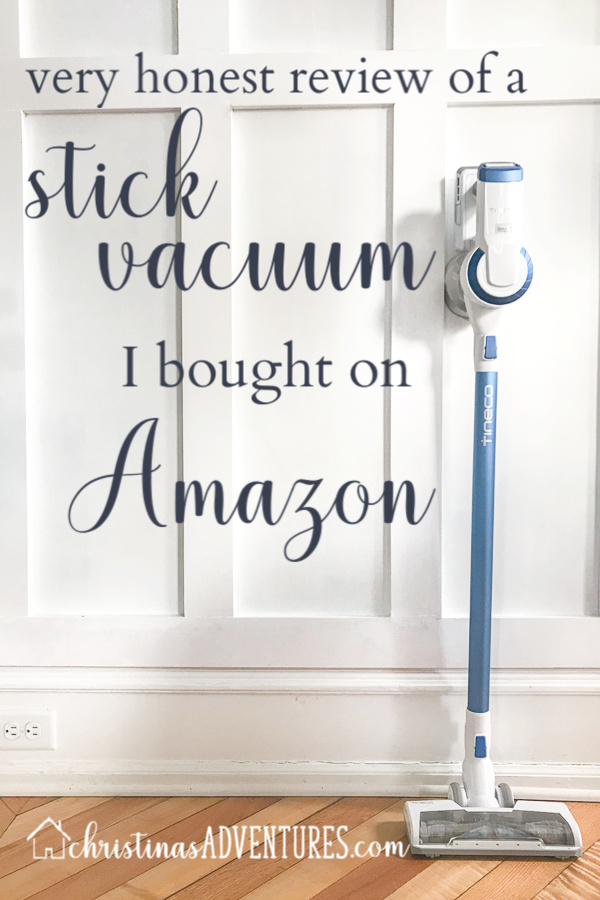 I bought it, and shared it on Instagram.  Turns out so many other people have also been considering a stick vacuum, but weren’t able to stomach that price tag.  I haven’t got that many messages in a LONG time – and even in the few weeks since I promised an honest review!

I made a video showing how it works, and you can see it down here – and then keep reading to see even more notes on the pros and cons of this stick vacuum: 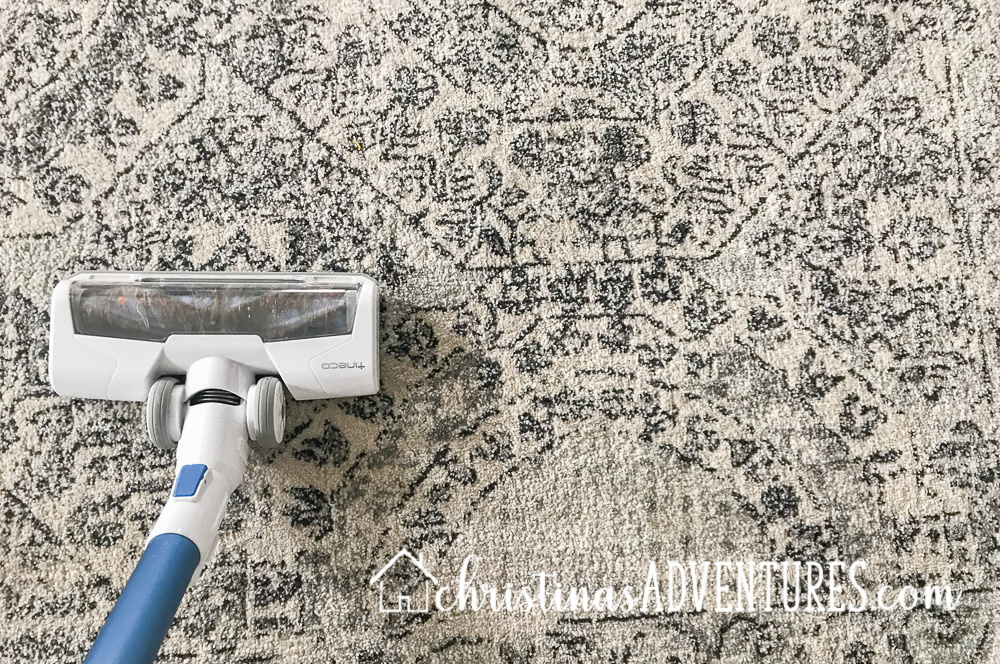 The stick vacuum on carpets:

I have a LOT of area rugs in my house, since we have hardwoods.  It does beautifully on almost every single rug, but for some reason it doesn’t like the rug under my kitchen table.  I can’t figure out why!  It still works, but I have to push it a lot harder than I do on the other rugs.  I do not have any shag-style rugs, so I can’t speak for how it would work on those…I’m guessing it wouldn’t work great on a super high pile rug though. 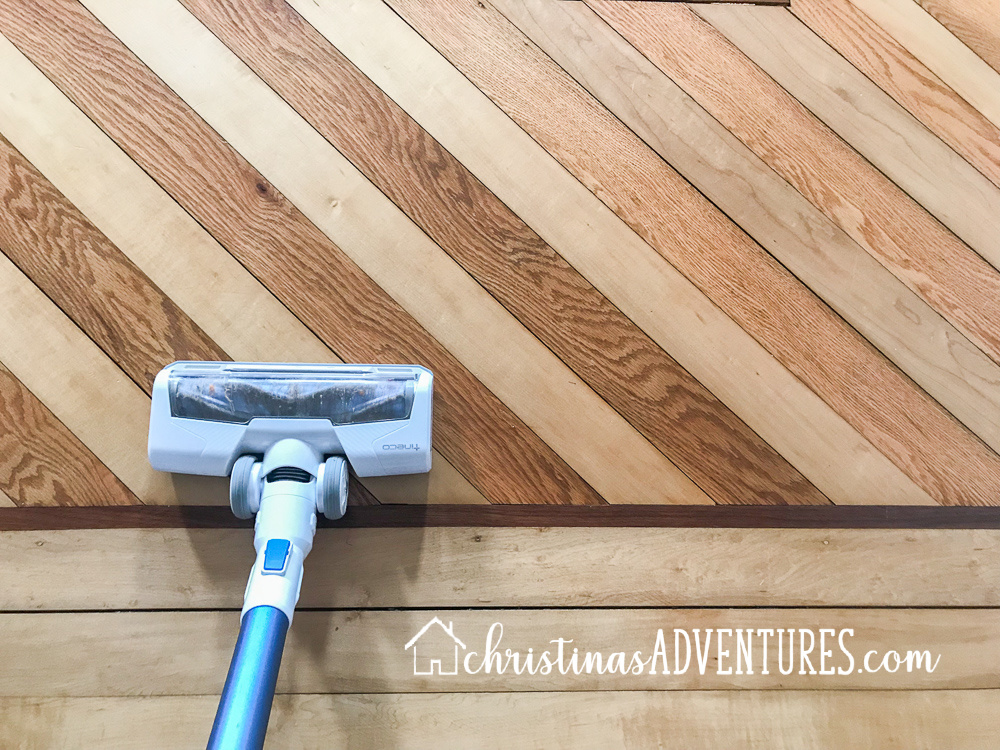 I was pleasantly surprised to see how well it transitioned from carpets to hardwoods.  We also have luxury vinyl tile floors in our kitchen and bathrooms, and it worked just as well on those.  The front of it has lights, which really help to show the dirt ad dust on the floors, or under furniture. 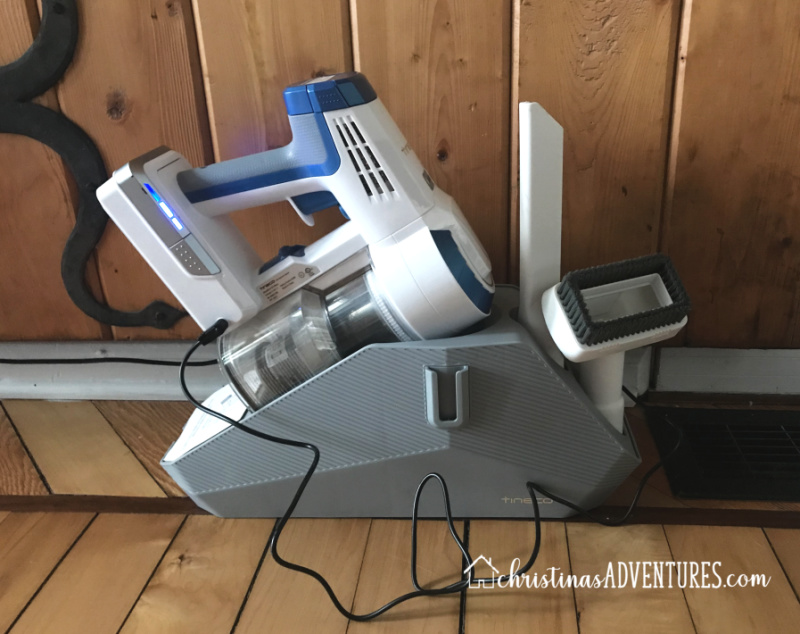 Lots of people are concerned about the battery in a cordless vacuum.  I only had the charge run out once, and that was when I hadn’t plugged in the vacuum before I used it (and was running off of the charge from the last time I used it).

In the description, it says the battery lasts for 25-30 minutes.  I’d say that’s accurate, as long as you’re not using it on “max” mode.  That will drain the battery faster, and I don’t think it’s necessary for a good clean.  I usually don’t do the downstairs and the upstairs at the same time, so I’ve been really successful with vacuuming the downstairs OR upstairs without the charge running out (our house is approximately 3,000 square feet).

Pros and cons of this stick vacuum:

Honestly – I am VERY happy with this purchase!  I paid for it with my own money – so total honesty here!  But definitely do yourself a favor and read the reviews on Amazon too – there’s a lot of other people’s opinions there too! Click the picture below to read them:

your FREE ebook and insider resources every week!

This error message is only visible to WordPress admins


Error: API requests are being delayed for this account. New posts will not be retrieved.

Make sure this account has posts available on instagram.com.