Oh man, I am so glad I can *finally* write this post.  We finished our bathroom in 6 weeks, (see the whole makeover here) but didn’t get to finish this shower in that timeframe.  Little did I know it would be many more weeks until we actually had a functional shower again! 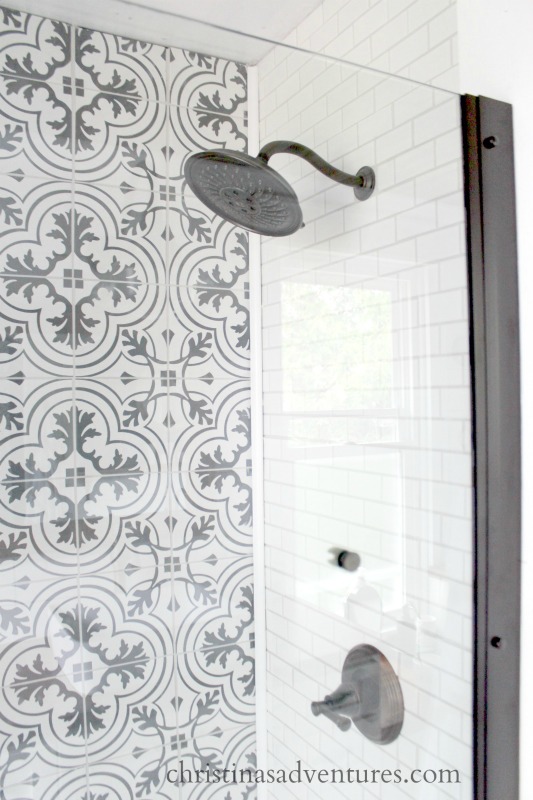 To all of my blog readers and Instagram friends who have been asking – here’s *everything* you need to know about this shower!  I’m sorry it took so long!

Getting this shower to where it is today was a *major* ordeal.  We had our contractor help frame it out, build the wet bed, and install the backerboard.  But we did the thinset, tiling, grouting & finishing ourselves. 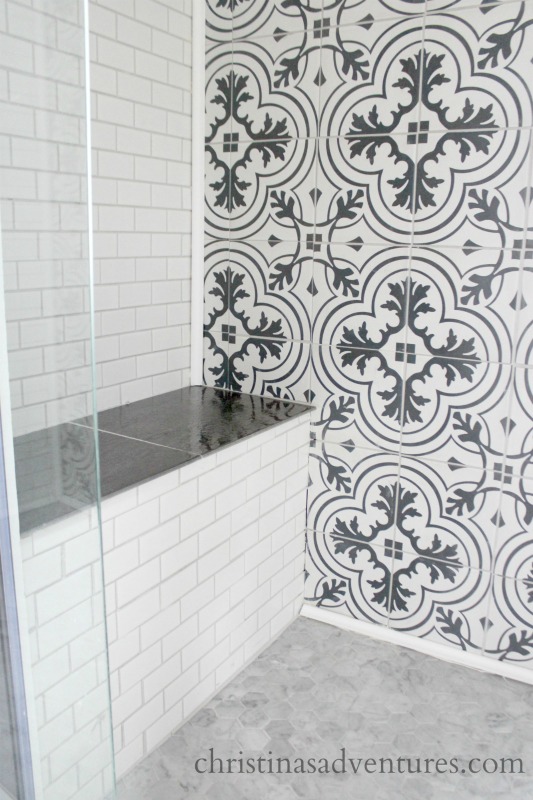 Since we didn’t do the majority of the prep work with this shower, I won’t be writing a tutorial, but here’s pictures of what it looked like along the way: 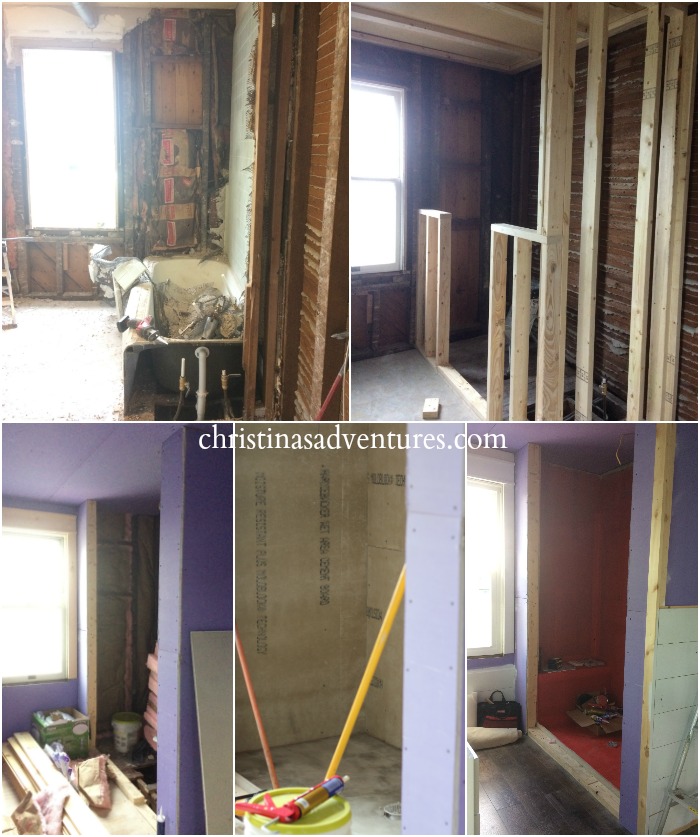 You can see that we had to change the original layout of the shower – I had planned on having a glass door and then glass panels on the upper sides of the door, and then drywall under those panels.  BUT then we got an estimate from a local glass supplier and it was going to be $2100 for just the door & 2 glass panels.  Um, yeah, no.  Out of budget.  So I bought this shower door (more on that later in the post) and we built the shower to fit that door instead. 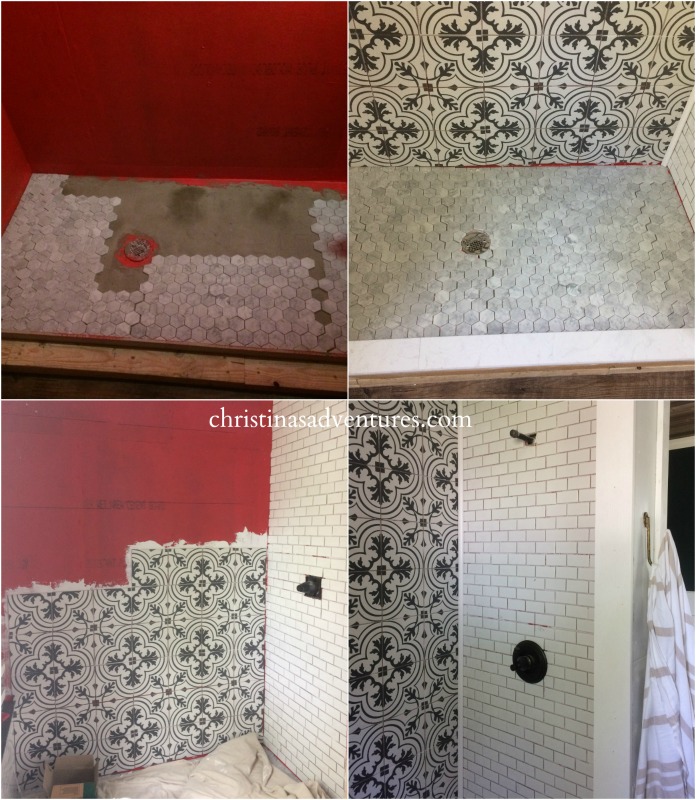 Here’s the tiles we used – You can read all about the tile choices in this post.  I went into detail about each of them there – make sure you read before purchasing any of them! 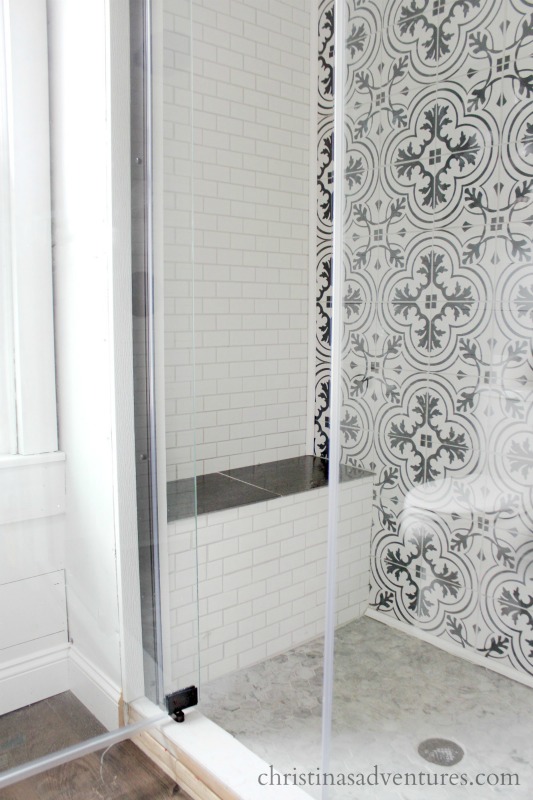 So – this shower door.  It was such a frustrating purchase!  Here’s the one we bought…we got it through Lowe’s, but it was through a company called Dreamline.  I ordered it a month before we needed it, and then the delivery date got pushed back TWO times so it ended up coming TWO months after we originally ordered it.  And this was after lots of phone calls and follow-up.  It was so frustrating.  So – I guess I’m saying – order at your own risk. I like the actual shower door, but honestly I may have ordered another one if I would have known how long it would have been backordered.

Side note – I didn’t realize the shower had these little glass shelves in it, and they don’t work for our shower design.  We may try to rig something up to make them work, but they’ll only work if the shower door goes flush up against the back wall (ours has a little side wall in between).  You can see the little brackets in the pictures – kind of annoying :/ 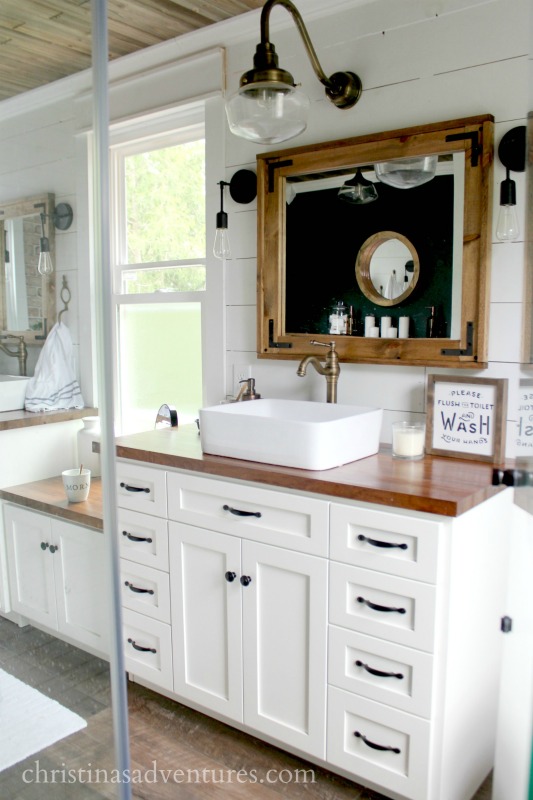 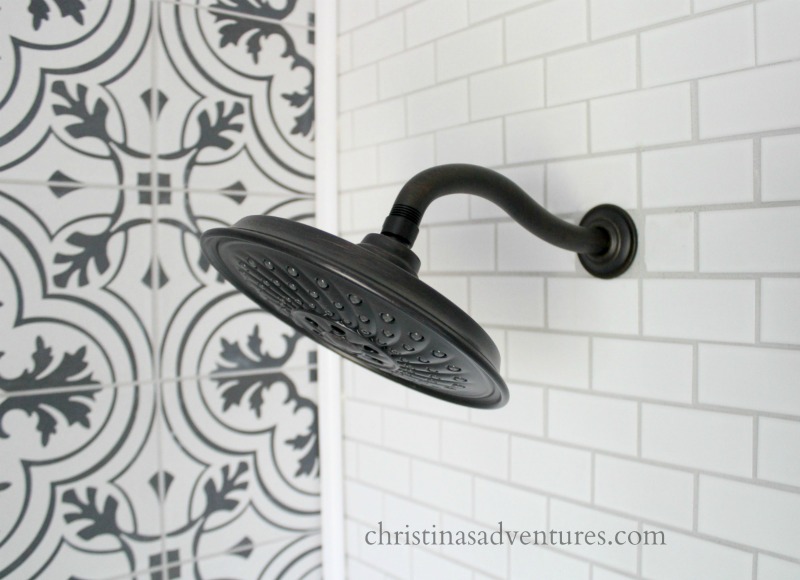 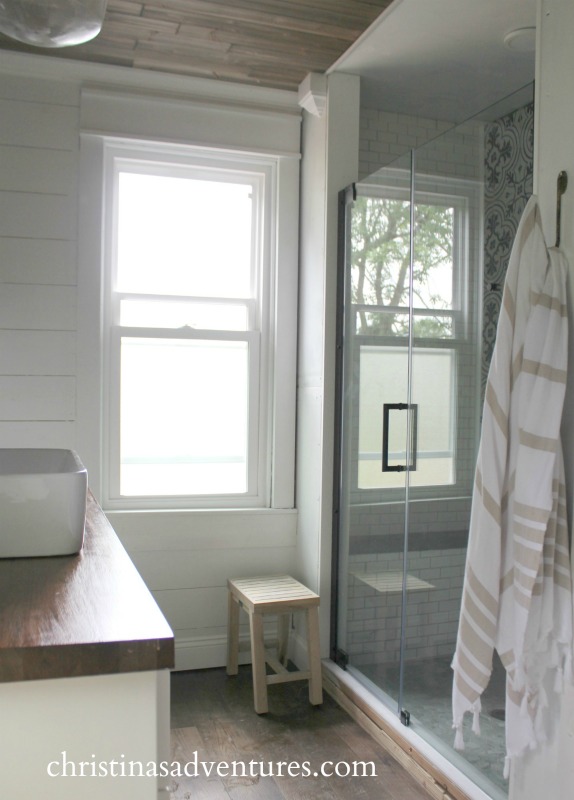 Love this sweet little bench – my kids use it to get to the sink to brush their teeth.

We wanted a place to put our shampoo & conditioner, so we had our contractor frame out this bench.  We got these tiles from Lowe’s for less than $2 a piece and I have NO idea what they’re called!  I’m so sorry – my husband picked them up and we cut them to fit this bench.  We also finished off some of the corner gaps with PVC corner cove molding – they’re like $4 for 10 foot pieces.  You can see in this picture we still have to caulk them: 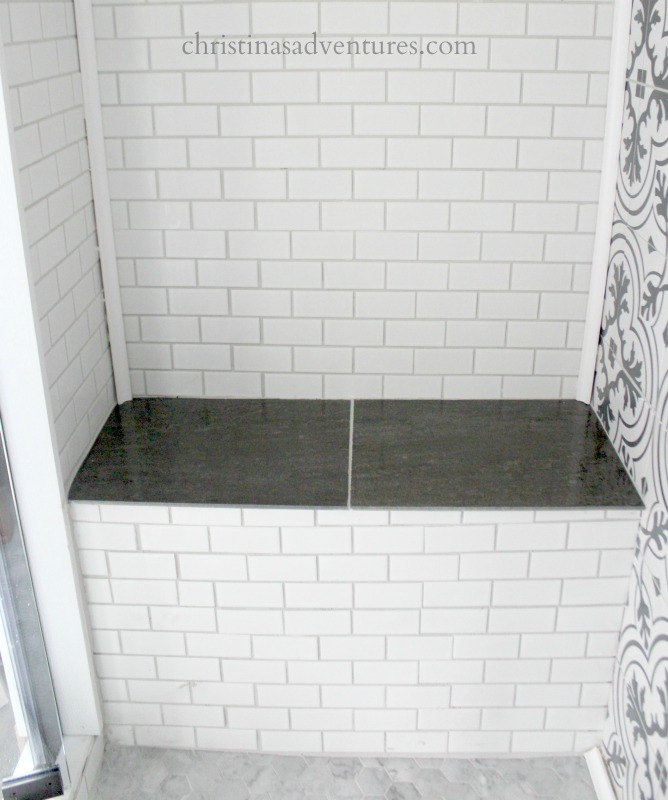 This is the grout we used on all of the tiles – I think the color worked well for all of them! 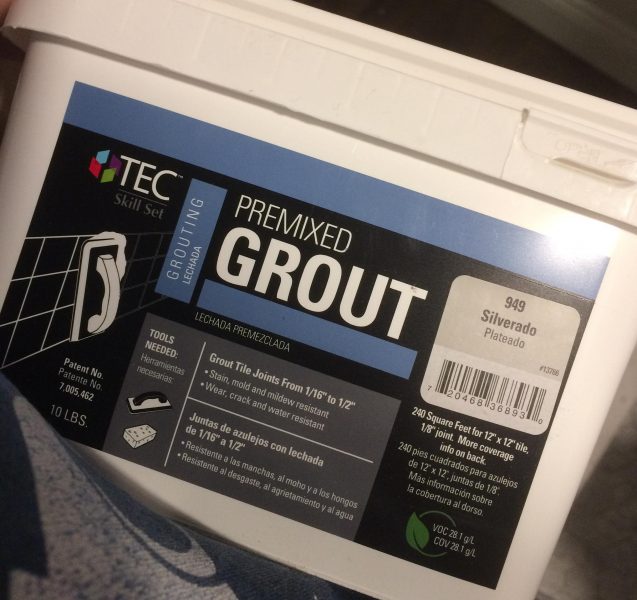 One last note: make sure you seal your patterned tiles. I learned this the hard way! On the left, you can see that the grout left marks and stains on the tile.  On the right, after we used the tile sealer, there were no grout stains.  We have a few stained tiles from our mistake, but most of the shower was sealed once we realized our mistake.

This is the sealer we used – it worked perfectly. 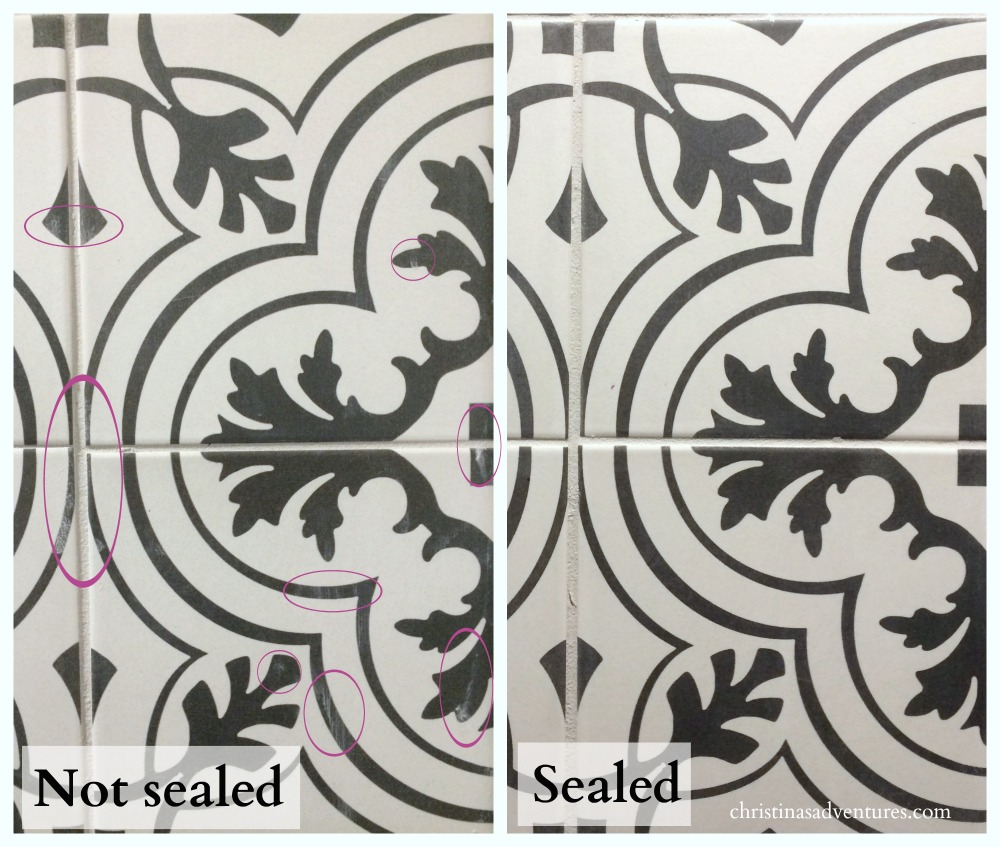 And now – we *finally* have a functional shower again.  It took a few months – but it’s done! 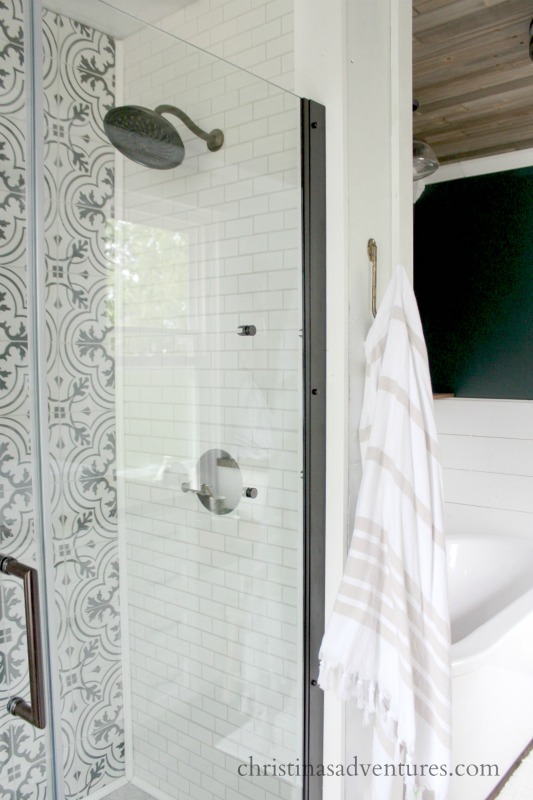 Make sure you see the rest of the bathroom makeover here – we are in LOVE with the whole transformation! All sources/paint colors are listed there as well. 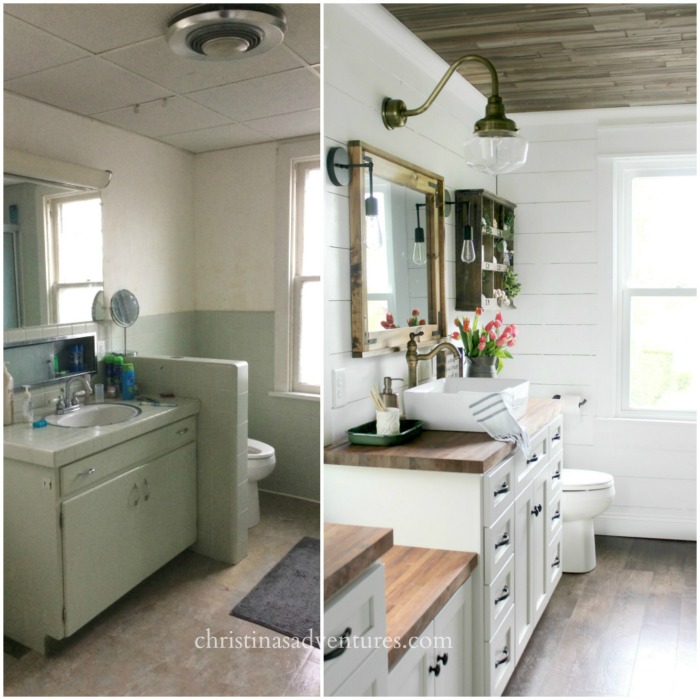 WOAH. This project is one of our most satisfying e

First time dressing up as a family theme for Hallo